A simple guide for farmers.

It is a very small mycoplasma, a sort of bug.

It has no cell wall so is difficult to treat as most bug treatments attack the cell wall of the organism exposing them and destroying them.

It cannot be transferred to humans and is unlikely to be found in any other animals. That is why it has the name Bovis meaning bovine. Eating the meat and drinking the milk is all OK.

It has a short life when exposed to the environment. They are suggesting a 60 day close down to be on the safe side as it does live for a short time in effluent, on paddocks and in trucks.

The testing is difficult and a blood test does not always give a reading if an animal has M-Bovis. Tonsil swaps at slaughter appears to be the best test. Hard to swap the tonsils of a live beast!!!

It does not necessarily affect all animals in a herd, and there may be “sleepers”.

Only a percentage of infected animals may show symptoms – mastitis that doesn’t respond to treatments, bronchial problems, joint inflammation often with pus being visible, and abortions. There are some overseas treatments that appear to be effective, usually vaccines as calves.

It can be transferred to other cattle in milk, so pasteurise any milk coming onto your farm to feed calves or use milk powder. Pasteurisation processes can be found in the internet. Disinfect cups if you are milking any mastitis cows just in case.

It can be transmitted by direct contact between animals, however there is no “over the fence” infection recorded, so it needs to be very close proximity transfers.

It can be transferred by an animal coughing.

It can be transferred in feed, but again it has a short life outside the animal.

What can you do?

1. Lift your biosecurity management on your farm – no unauthorised people onto the property.
2. Have formalin foot baths for those entering and exiting livestock areas.
3. Set up a spray disinfectant station for all non-on-farm vehicles that enter and exit the property other than the tanker track where the herd does not graze. The disinfecting should include stock trucks, fertiliser spreaders, cultivation and harvesting contractors and stock agents. Disinfectants will only be affective if the vehicle is clean, there is no point in disinfecting dirt!!
4. Be proactive and involve the vet if you have any abortion storms, mastitis that won’t go away or ugly joint problems. Better to be safe than sorry.
5. Complete all NAIT transfers the day the animal is shifted.
6. Advise any people involved in your property if it has any sort of MPI notice attached to it regarding M-Bovis.
7. Don’t look for someone to blame for it coming here.

M-Bovis has the status of being an “Unwanted Organism/Disease”. It does not have the status that Foot & Mouth, Anthrax or even Brucellosis has as a “Notifiable Disease”. It is not listed in the MPI website as a Notifiable Disease, but under section 144 of the Biosecurity Act 1993 allows MPI to act if any disease has the potential to cause significant economic loss.

Even lifestyle blocks can be a source of transfer as they buy stock from many places and are the ones most likely to fail when it comes to NAIT registration.

M-Bovis is managed in all other countries and outbreaks occur spasmodically with varying effects.
As at end May 2018, MPI believe they have identified all farms where stock contacts may have been made. And that includes animals returned from grazing with multiple herds where one animal may have had a contact with another somewhere down the track for the original outbreak.

Agsafe’s farm safety procedures help avoid minor incidents to more serious accidents on the farm, which can result in disability or death.

Safety is not just for other people, it is for us all. It is about you.

17 people on average are killed in workplace accidents on farms every year making it one of the most dangerous occupations in NZ. Agsafe is about lowering that number through farm safety and consultancy measures which lower the risk.

It’s about your productivity. Fit and healthy people are essential for a successful farming enterprise. On an average ACC pays for approximately 20,000 farm-related injury claims each year. This represents time lost and limited productivity which are costs not always accounted for.

It’s the law. To meet your obligations under NZ’s health & safety legislation you are required to do everything that is reasonably practicable to provide and keep a safe work environmet. 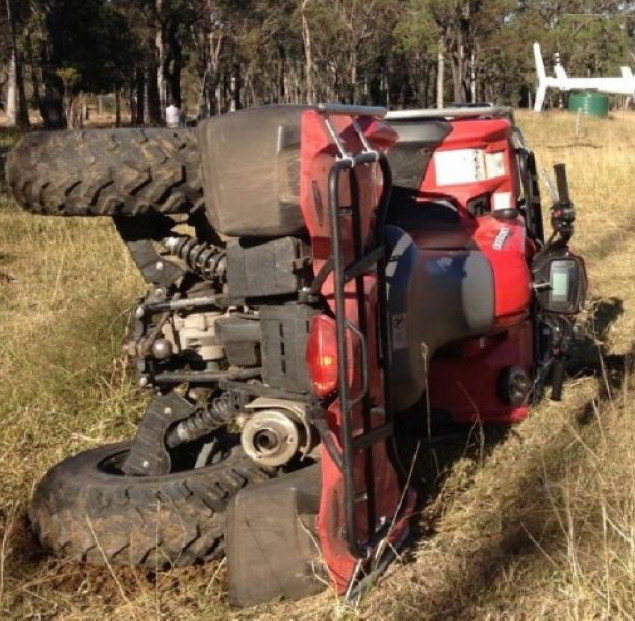 We can prepare and provide the following:

Stock, quad bike and tractor accidents cost over $ 12.5 million in a year to ACC

We can help you meet the standards required to comply with your obligations in Health and Safety.